When Dr. Pausch seems like a really great person. When he showed the pictures of his tumors I was in shock. He looks like a perfectly healthy man and even did several pushups on stage to show that he was in better shape than most of the people in the audience. Throughout his lecture you really come to know him as a man with great perseverance. He is not one to take no for an answer or to easily give up on anything.

He begins his lecture by discussing his list of childhood dreams, some of which were quite comical. The first on his list was to experience zero gravity. He had a team of students that worked very hard to get a chance to ride one the “Vomit Comet”. This is a type of plain that is used to help train the astronauts and allows one to experience zero gravity. His team ended up winning the opportunity to ride on the “Vomit Comet”. Dr. Pausch was soon informed that the professor was not allowed to go with his students. He then discovered that a journalist was allowed to attend. He then did the proper paperwork and was allowed to go. This example alone shows the drive that he has to accomplish his goals that he has set for himself. 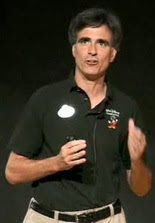 Another childhood dream of his was to have an article published in the encyclopedia. He eventually accomplished this goal when he had an article on virtual reality published. It was really funny to see the picture of the set of encyclopedias that he had on his presentation. My grandparents still have a full set at their house. I remember when I was in grade school I had to go to my grandparents house to use the encyclopedias in order to write certain papers. It is crazy to think that now we can just go to google and type in any topic and get endless amounts of information. In fact, some teachers today tell you to google a topic and write about it. It is really fascinating how far we have come in such a short period of time.

I really liked his perspective on the “brick wall”. Dr. Pausch says that the brick walls are there to stop the people who don’t really want it and for the ones who really want it, it is there “to give us a chance to show how badly we want something”. This is something that I can relate to. My husband is a perfect example of someone who has gone above and beyond to achieve his goals that he has set for himself. This is something that everyone experiences at some point in their life and they either choose to walk away or to put forth that extra effort and really succeed at their dream.
Posted by Cinda at 9:10 PM